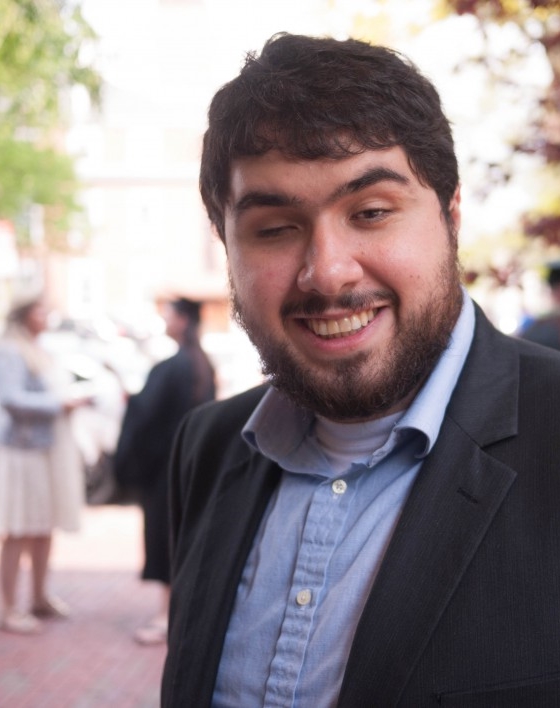 While most of us go about our everyday lives here on Earth, people like Sina Bahram are weightlessly pioneering accessibility in outer space. The blind computer scientist, consultant, and entrepreneur was selected as an AstroAccess ambassador to participate in a microgravity flight aimed at making space travel possible for all, regardless of disability. His team conducted observations and experiments to investigate safety, communication, and environmental modifications that would democratize cosmic exploration.

“Airplanes are the way they are now because nobody cared about accessibility when they should have, and we're not going to let that happen to space travel."

Bahram tells the story of a mishap in which an astronaut was out on a spacewalk when his visor released some cleaning solution that irritated his eyes and made him unable to see clearly. The situation quickly became perilous, though in the end the astronaut recovered safely. He notes that had the suit had been designed for a blind astronaut with things like audio feedback, sonification, and vibrotactile feedback, the embedded assistive technology would have been a quick remedy. In his words,

“It’s not only an inclusivity and equity issue, it's a safety issue. And yet again, it goes to show that these things that we do for inclusion and accessibility, they may be critical for one audience, for example, a blind astronaut, but they enhance and augment it for absolutely everybody.”

When his feet are on solid ground, Bahram spends a lot of his time thinking about how to welcome the widest possible audience into various terrestrial spaces, both digital and physical.

And to him, accessibility is a culture to be adopted rather than a series of quick fixes. He aims at the root of accessibility barriers, tackling workflows and processes from a holistic perspective. It’s an ethos that says,

“Let's not make something and figure out how to make it accessible, but rather let's make everything accessible. It is born inclusive from day one.”

In the digital arena, Bahram insists on a cohesive approach to both code and content. His visual description platform, Coyote, integrates mechanisms directly into content management systems, offering a seamless solution that “represents a multiplicity of voices.” It’s the first of its kind to incorporate multiple descriptions in more than one language, including sign language interpretation. He’s also taken it upon himself to revamp assistive technologies that are stuck in the nineties with a project titled ARIA AT, which standardizes expectations of the technology, vendors, and browsers, as well as the way they surface accessible information. He’s a master at maximizing efficacy without leaving anyone out.

“The good news,” he affirms, “is that as always with inclusive design, all the things we're doing help everybody.”

The discernable benefits of this comprehensive methodology are cropping up in places like Netflix, which applied some rigor in response to a lawsuit and became a leader in audio description. And across the US, universities are collaborating in efforts to comply with government regulations like those outlined in the Americans with Disabilities Act. He also credits many museums for their heightened awareness and has been tapped to ensure that disabled people are included in the narrative. But Bahram highlights the litigious pressure that precipitated these successes, explaining,

“It's important to acknowledge all of the advocacy work and the frustrations of the disabled community that went into making [things] that way.”

Behram’s drive for progress continues, as industries like tech lag behind, biases in AI leave marginalized groups underrepresented, and a disconnect between educational and career opportunities for disabled people remains. To him, confronting the enduring resistance to change doesn’t require big budgets. He explains,

“The perception of difficulty is something we see a lot where people perceive such a high burden and cost and level of difficulty with making things inclusive, that it's easier not to bother or try. And this is honestly the mentality that needs to be shifted because I'm telling you, I don't think it's a funding issue at all. I don't think it's a resource issue. It comes down to will.”

As broad and expansive as Bahram’s work has been, the life-changing impact it can have on an individual level is the payoff. Things like a multi-tap keypad that simplified communication for one man in Alabama carry as much significance as a flight into space. And he invites all of us to make a difference in our way:

“I would encourage [everyone] to understand that no matter who they are, no matter what field they work in, or if they're retired or have young kids, whatever, there is something... actually, there're a lot of things that they can be doing to make the world more inclusive.”